Why are bonds the perfect crisis-proof asset?

Most people sleepwalk in life. Not sleepwalking in the usual sense (suddenly bolting out of the bed in the middle of the night and deciding to go on a cruise type), but something far more profound. They prefer spending their free time snoozing in front of trashy TV programs rather than investing it wisely to improve their minds and bodies. This was why the majority of the population in the West was caught off guard when COVID-19 hit, even though the warning signs were all too abundant (Bill Gates’ warning in 2015, the outbreak in China in January, the classic exponential growth rate of an epidemic in a country).

Figure 1. Growth rate of COVID-19 across the world

Source: Our World in Data

Ask any historian and they will immediately tell you that crises (man-made or otherwise) are an enduring part of humanity and they occurred on an alarmingly frequent basis. Taking pandemics as an example, without even needing to go too far into the past (whose occurrence was far too many to count), we have had at least 4 respiratory epidemics since 2003 (SARS, swine flu, H5N1 bird flu, MERS). So COVID-19 really should not have been a surprise. Yet it was. 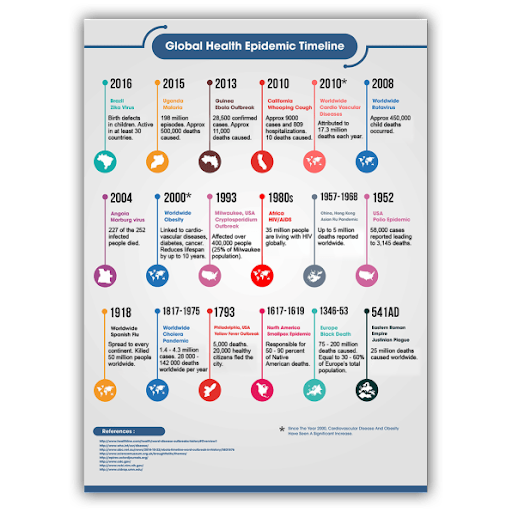 Figure 2. An outline of significant pandemics in human history; more than ⅓ of them happened after 2008.

History also shows that preparation is key to counter the effects of such disasters. When much of the world was still snoozing in curiosity about what COVID-19 is, a small group of prepared elites was already activating their contingency plans [1] and isolating themselves from the rest of the world. In hindsight, it turned out to be a shrewd move. Preparation is, therefore, the key not only to survival but will also help the prepared to thrive post-crisis as they will be the best resourced (and resource equates to power).

Preparation applies to all aspects of life and financial preparation should be the number two priority (after physical security) of all investors. The best way to financially prepare your portfolio against crisis is by owning assets that are crisis-resistant or what we call “bulletproof assets”. These assets represent ownership in businesses with resilient models that perform equally well during bull and bear markets, garnering handsome returns for investors.

Why is cash trash?

Investors often retreat to cash during times of uncertainty. After all, cash is tangible, liquid and maintains its nominal value, thus providing a (false) sense of security that their net worth is safe and certain amidst an ocean of uncertainty. However, this is wrong. We strongly advocate the view that cash is trash and the only way to preserve your wealth during a crisis is through quality asset ownership.

Modern-day cash is a fiat currency that simply represents a claim on value rather than the value itself. As illustrated in the M1 supply in the US below, the total amount of money in circulation is increasing at a rate that far exceeds that of economic growth. This means that more cash is chasing after a finite amount of goods and services, thereby leading to inflation.

Figure 3. M1 supply in the US across the years

This system generally works well during times of stability and prosperity. However, it comes under increasing strain when things get tough:

What this has demonstrated is that paper money is inherently unstable as it relies on the goodwill of the people and competent economic management of the government (both of which are in short supply in today’s world). As a result, there is a clear and present case for diversifying away from cash into other safer alternatives. This is not to mention the fact that central banks around the world have universally adopted near-zero base rates in order to use lending to boost economic activity, thereby further impacting return earned on cash holding and thus eroding its purchasing power.

Why do bonds trump all others?

There are a few asset classes that can contend to become “bulletproof” during a crisis, namely:

We have compiled the table below to examine the various characteristics across each class.

What we have seen from above is that bonds strike a balance between high security and relatively high safety across a multitude of different scenarios, thus proving to be a resilient asset class against future shocks. In particular, bonds have the following features that make them especially valuable in times of uncertainty:

Some may argue that gold is also a feasible bulletproof asset. However it possesses several adverse characteristics that make it ill-suited:

Higher return = higher risk? Invest where it is not true

What is remarkable is that contrary to conventional wisdom, the increase in return does not necessarily result in additional risk. This erroneous model comes from the “efficient market theory”, which proclaims that all the risks and future profits are already embedded into the price of any asset. If that would be true, there would be no profits to be made for investors, as the risks would always annihilate the profits in the long run.

The practice shows that the markets are always inefficient. It means that there are always bargain deals available, as well as ridiculously overpriced deals. Indeed, the prices may embed the expectations of future growth and risks, but they only reflect the expectations of growth and risk, and not the reality. A good example is the rise and fall of WeWork – once a unicorn, now a junk company. The company is still the same, but the investors took off the pink glasses.

Warren Buffet and his teacher Ben Graham use the concept of Mr.Market to explain the pricing inefficiency anecdotally: “Mr. Market’s mood changes like the weather in the Atlantic; whenever he is in a good mood, he buys most everything. You shall sell assets to him. If he is in a bad mood, he sells worthy assets for a bargain price. You should buy from him”. George Soros, one of the most successful fund managers, starts from even a higher vantage point: the markets are always wrong, in his opinion.

The second type of inefficiency is uneven access to capital. For some companies, like for the large real estate companies, access to capital is fairly easy: they have a lot of collateral and can accommodate vast amounts of capital, so they are interesting for the large funds even if they can derive only a mere 2% – 3%  returns. For other companies (example), raising capital is difficult: either a business is too small to attract the interest of large investors, or they do not have enough collateral  to raise debt from banks (e.g. they do not own real estate). This is why some companies are pushed to offer way above-the-market dividends to raise capital, and that is why a high return is not always equal to high risk.

When constructing your bulletproof portfolio, make sure you:

We will review an example of such an all-weather bond portfolio, constructed out of bonds backed with various uncorrelated revenue streams, issued in the countries whose economies are considered to be low-correlated (USA, Switzerland and Japan), and have a viable risk-reward ratio.

However, a well-diversified portfolio should include as a conventional standard at least 10 to 15 assets. So we encourage you to finish this exercise by refining your own criteria and finding your candidates to invest.

The bonds we included are:

Consequently, investors might wish to consider constructing a portfolio that incorporates all 3 securities (or more). This will simultaneously expose the capital to 3 different low-risk geographies, sectors and business models, all of which are hugely crisis-resistant.

2020 has proven to be anything but ordinary. Yet great fortunes are often made during times of uncertainty as Warren Buffett famously declared to “be greedy when others are fearful”. However, being greedy does not mean being reckless and it is vital to ensure that you are achieving the greatest return for a given level of risk being taken. Bonds strike the ideal balance and thus should form an integral part of your portfolio.

Don’t miss a thing about your wealth

We keep your data safe and send you not more than 1-2 useful emails a month.*

Ownership and direct participation in all profits of operational companies

Apply to become an investor

- That I am a resident of Switzerland, Germany, Austria or Liechtenstein.

-That I have received access to the issue prospectus here.

This website uses cookies to improve your experience while you navigate through the website. Out of these, the cookies that are categorized as necessary are stored on your browser as they are essential for the working of basic functionalities of the website. We also use third-party cookies that help us analyze and understand how you use this website. These cookies will be stored in your browser only with your consent. You also have the option to opt-out of these cookies. But opting out of some of these cookies may affect your browsing experience.
Necessary Always Enabled

Any cookies that may not be particularly necessary for the website to function and is used specifically to collect user personal data via analytics, ads, other embedded contents are termed as non-necessary cookies. It is mandatory to procure user consent prior to running these cookies on your website.