After the 1929 Wall Street Crash, investors fled from equities, apart from a handful of well-established "blue chips": market leaders such as Imperial Chemical Industries in the UK, Deutsche Bank in Europe, or General Electric Corporation in the USA.

Accordingly, up to the outbreak of World War II in 1939, most private investors allocated the great majority of their portfolios to bonds, especially government issues. With benefits such as capital preservation, income generation, the ability to counterbalance equity in a portfolio, and the potential to provide a hedge against inflation risk, fixed-income assets enabled investors to take advantage of this market cycle happening at the time, and into the future.

Bonds are a core part of many investment portfolios to this day. However, there are a number of common myths about bonds, and the risk is that taking those falsehoods as truth could lead to poor investment decisions.

We're here to debunk and dispel some of the most common myths about bonds. Read on to find out what these widely believed myths are and what the truth of the matter really is.

In the mid-1960s, the pendulum swung back and the so-called "cult of the equity" emerged, led by some of the biggest US and UK pension funds at the time. These fund managers come to realize that equities offered the most direct and rewarding type of investment to participate in the burgeoning post-war economic growth. As history's longest and strongest economic boom took hold across the globe from that period onwards, those "cultists" were proved correct.

In such circumstances, bonds were considered "boring" by many investors, suitable only for pensioners and others in need of income rather than capital growth. Rising inflation in the 1960s also caught the bond market by surprise, leading to major losses.

However, those who eschewed bonds ended up suffering as a result. As successive crises – the stock market crash of 1929, the "dot-com" bubble collapse of 2000, and the Global Financial Crisis of 2007 to 2008 – assailed the financial markets, interest rates collapsed and bonds boomed.

The popularity of stocks vs. bonds
Source: Longtermtrends

The chart above shows the ratio that divides the S&P 500 by the Total Return Bond Index. In a nutshell, when this ratio rises, stocks beat out bonds as the better investment, whereas when the ratio falls, bonds win out over stocks. As can be observed from this chart, at times when a financial crisis hit, investors tended to find a safe haven in bonds, which in turn increased the popularity of bonds for many years to come.

Clearly, bonds are not boring – quite the opposite.

Another myth that bonds are plagued by is that bond markets do not offer the same breadth of choice as their equity counterparts. This is untrue, as we will rebut below. 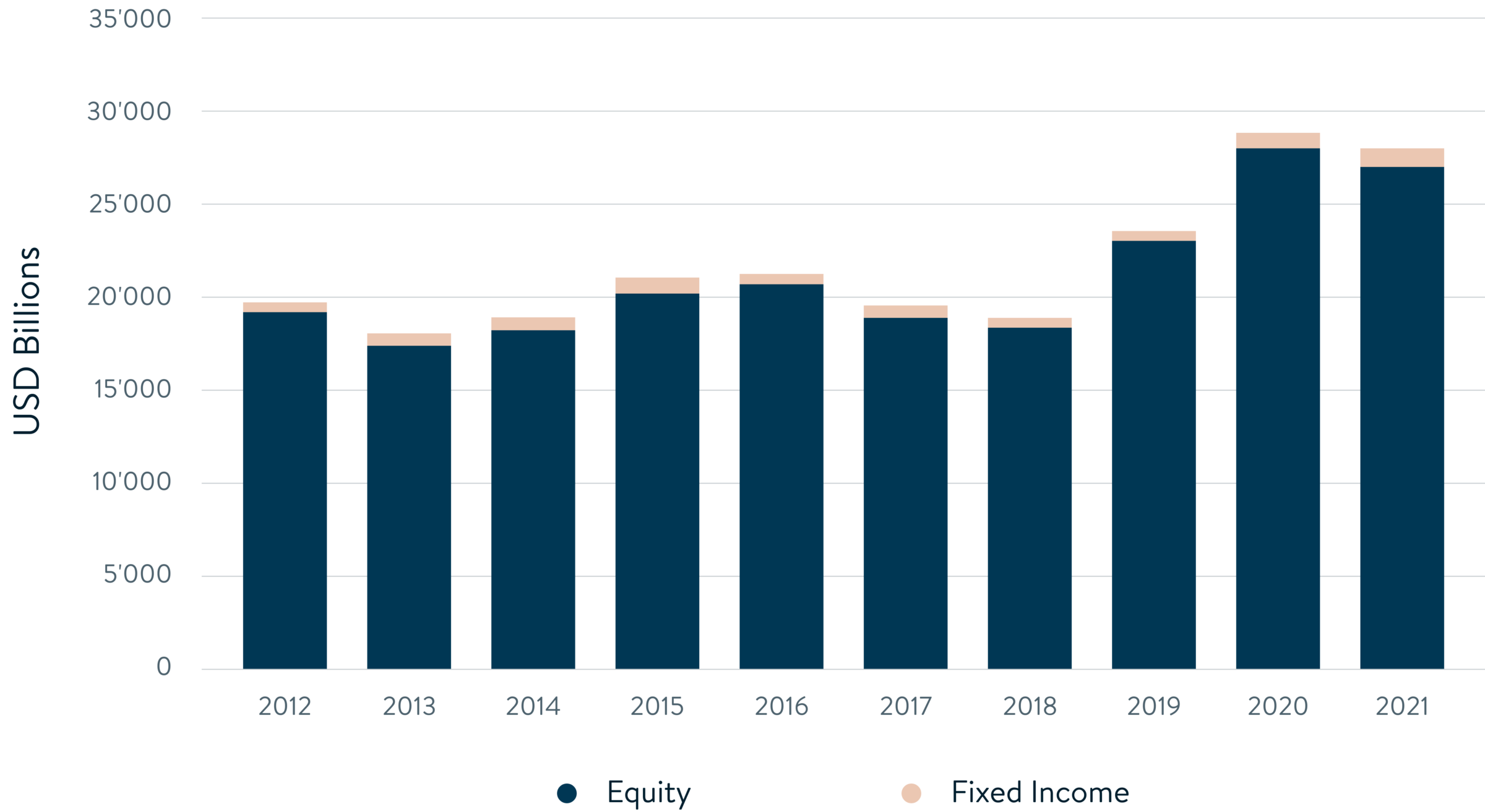 The chart shows that in 2021, new issues in worldwide bond or fixed-income markets totaled USD 26.8 trillion, nearly 27 times that of equities. Additionally, bonds' total market value, or capitalization, was USD 126.9 trillion, while equities were worth USD 124.4 trillion as of 2021.

The high volume of new bond issues reflects the fact that they typically have a fixed lifespan. When bonds mature, governments (certainly) and companies (typically) will issue new bonds to cover their new financing needs.

As for choice, 68% of bond issuers are corporations spanning a broad range of sectors and industries. But unlike equities, the kinds of bonds that can be traded can also be issued by governments or by government-backed agencies and "supranational" borrowers, such as the World Bank and the European Investment Bank.

While it is true that investing in bonds is less risky compared to other asset classes, such as stocks or real estate, less risk does not equate to no risk whatsoever. There are inherent risks when it comes to investing in bonds, as with any asset class. For example, bond issuers may default on their obligations, which could leave investors unable to recover their principal.

The relative risk of a certain bond can generally be evaluated by reviewing its bond rating, which is expressed as a letter grade measured by the top three rating agencies. 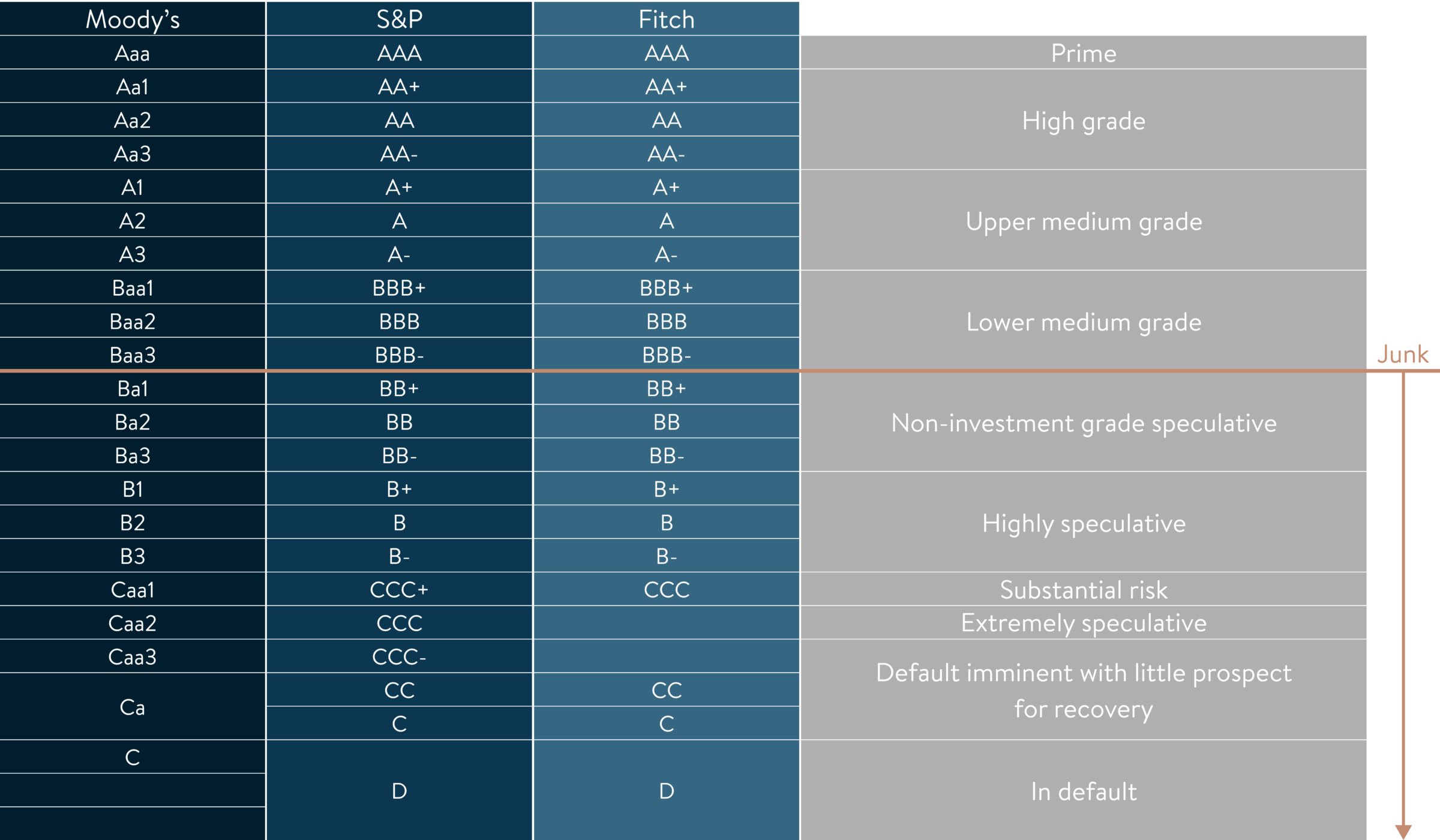 Overall, the level of risk has been rising across bond markets as issuers have taken advantage of low interest rates to borrow for longer periods. A longer duration represents a greater risk for buyers, as the average time to redemption (the number of years before an investor can be repaid the bond value by the bond’s total cash flow) has risen from under five years in 2015 to over six years as of September 2022. This exposes bond investors to a greater probability of interest rate changes over time. 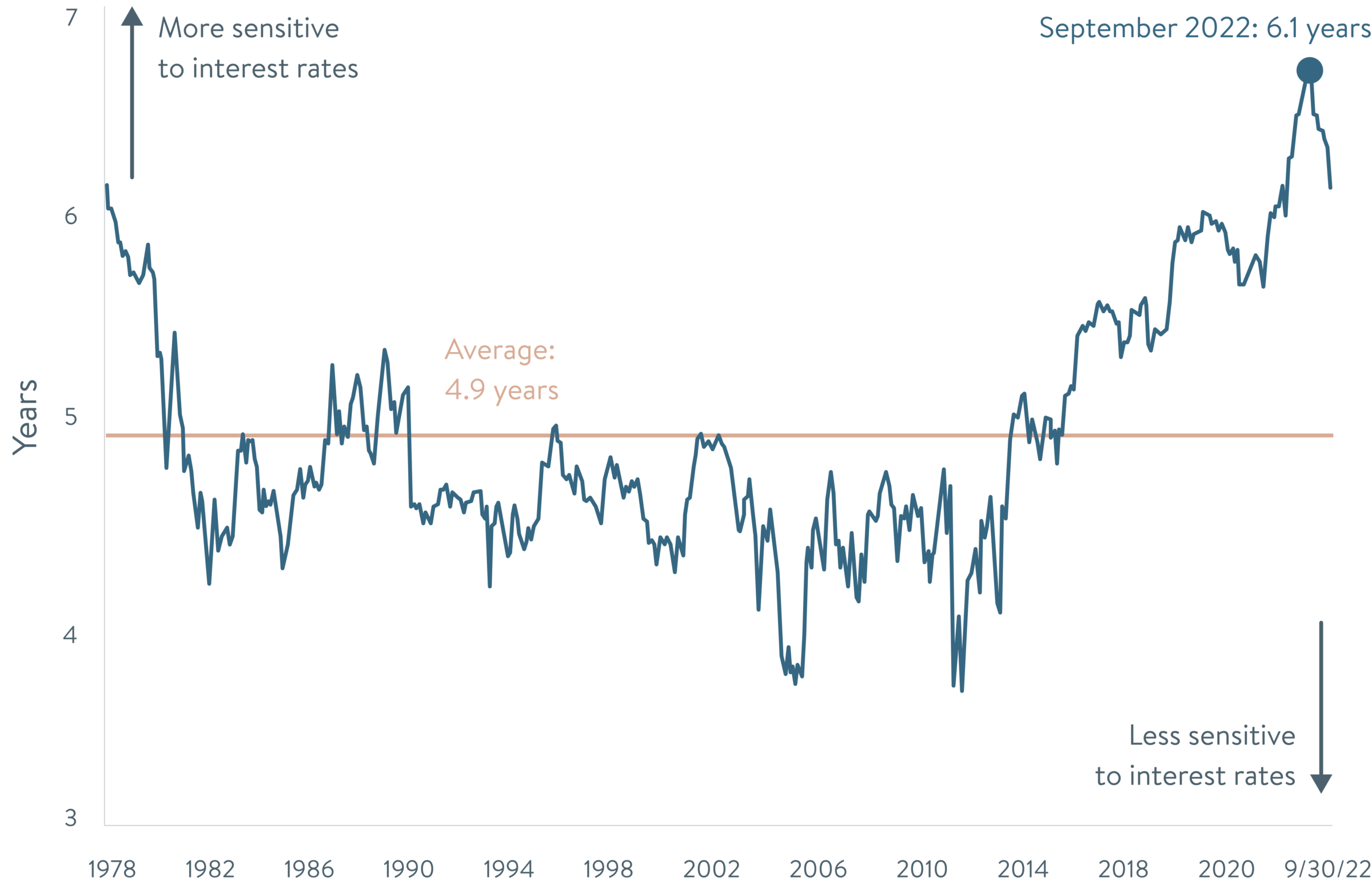 Inflationary risk should also be added to the increased duration of bond-holding periods. Even at the much higher levels that are seen to be prevailing today compared with just a year ago in 2021, bond yields still trail far behind resurgent prices. This is especially true of government bonds.

However, bonds can still provide diversification benefits even during periods of rising interest rates due to the fact that they generally have a lower correlation with stocks, which enhances their ability to reduce risk when included within an overall investment portfolio.

According to the Morningstar analysis of previous stress periods for inflation and interest rates, it was found that stock/bond correlations have rarely increased above 0.6, and then only during the most acute periods of rising rates and/or inflation. As a result, bonds can still play an important role in reducing portfolio risk, even in periods of weaker fixed-income performance.

A widely held belief is that bond prices are governed only by the direction and extent of interest rate movements. The claim is that the entire market tends to move in the same direction at the same time.

While the influence of central bank rates is undeniable, particularly on government-backed bonds, the chart below shows that this effect varies significantly across the broader market. Most bond issues are from companies, which are subject to a much wider range of factors – sales, commodity prices, geopolitics, management quality, and so forth. These diverse factors matter at least as much, if not more, than monetary policy and the direction of interest rates.

Michael Milken was an American investment banker whose success in developing the high-yield bond market in the late 1980s earned him the unofficial title of "Junk Bond King." Later, he was imprisoned for insider dealing, which only helped to cement the association many already held that high-yielding bonds are "junk."

All too often, popular opinion is misinformed, equating the failures of a few with the entire high-yield sector. Junk bonds are merely those that may carry a higher risk of default than the majority of bonds issued by corporations and governments alike.

Referring back to myth 3, in order to assess the risk quality of a bond, credit rating agencies, such as Moody's, Standard & Poor's, and Fitch publish code designations (for instance, AAA, B, CC). All ratings from BB+ and under are considered below investment grade. Bonds in this category include those issued by household names as Netflix (a prolific issuer), Citigroup, and Bausch Health, the Canadian parent of Bausch & Lomb.

These market-leading names issue bonds that are not classified as investment grade because credit ratings reflect the needs of banks, pension schemes, insurers, and other closely-regulated lending institutions which tend to have highly conservative requirements.

An investor should keep this bias in mind when considering which bonds to invest in. For individual investors, it is probably better to take a judicious approach with a higher appetite for risk when investing. Unlike lending institutions, individual investors are managing their own money, rather than others’ money, and they can make decisions within their own personal risk tolerance. Many individual investors understand that a little extra risk may lead to better returns.

Some believe that it is impossible for bondholders to influence the actions and principles of issuing companies with regard to ESG or green concerns because the investors are lenders rather than owners, unlike shareholders.

The World Bank would beg to differ. In 2007, a group of Swedish pension funds wanted to find green projects in which they could invest. These funds asked the World Bank for help and, a year later, it issued the world’s first green bond. This then became the worldwide blueprint for similar bonds from other issuers.

Although still making up a tiny fraction of the total bond market volume, GSS+ ("green, social, sustainability, sustainability-linked, and transition") bond issuance is growing at a rate of approximately a billion dollars annually. Governments, utilities, and the financial sector have been the main issuers, but industrial, materials, and consumer groups now have almost half of all issuance as companies seek to fund their net-zero pledges.

Having addressed how six of the most common myths of bond investment are all misplaced or ill-informed, adding a bond allocation to an investment portfolio, especially higher-yielding corporate issues, may work wonders.

To achieve this, it is important to return to myth 3 and the need to create a balanced investment portfolio through diversification. When an investor is in the prime of their working life, with the advantage of time on their side, equities might have to date been the largest allocation in their portfolio because of their superior long-term performance.

However, as the booms and busts of the past 25 years have demonstrated, that long-term performance advantage can be blown far off course at certain times. These breaks in an overall upwards trend may occur at the most disadvantageous times of an investor's life, such as needing money for a wedding, paying a child's university tuition, or for a comfortable retirement.

At these times, investors would do well to reap the benefits of bonds. Investing in bonds that offer above-average yields and a range of maturities selected to match the likely timing of these negative events can make it easier to weather economic storms. If any of those dates coincide with a market downturn, there will be no need to scramble in an attempt to secure a decent price for wilting equities. Instead, as promised by bond issuers, an investor will be ready with the redemption proceeds from bonds, whatever the market conditions may be.